WBC contributes directly to labour movement projects at home and abroad. Running festival bars does not guarantee large profits. We face significant competition for these commercial franchises and there is risk involved. Not all festivals meet their target for ticket sales and sometimes they can be a literal wash-out for everyone. However, we try to ensure we use our experience to make sensible commercial decisions so that there is some surplus. This can then be used to fund BWTUC’s own local activities and to support selected projects that promote workers’ rights and welfare internationally. Here are a few examples.

WBC is backing a major project in support of the Greener Jobs Alliance’s vision of greening the British economy. GJA is a partnership body that includes trade unions, student organisations and campaign groups. It focuses on jobs and the skills needed in the transition to a low-carbon economy. Funding for an initial two-year project was provided by WBC from the stake-holding in the Glastonbury Festival and launched at the Left Field in June 2011. It aimed to join up activity at community and national level to generate demand for low-carbon jobs and training and to influence national policy.

The work was recognised at national level when in 2012 a GJA project with South Thames College won the Best Newcomer at the Green Gown Awards. This year it was agreed to fund a two year extension of the project. An expanded programme of work will cover economic and education policy advocacy, energy policy from a workers’ perspective and climate change awareness in trade unions. Community organisers are working with students and local activists to support education for sustainability projects on issues like air quality.

This union organises among the three and a half million workers (mainly women) in the industry that creates 80% of the country’s export trade. Sweatshop work in dangerous conditions for poverty wages still supplies much of the clothing to be found in our shops. The union has to campaign in a hostile environment with few legal rights for the workers, and needs to build awareness and support abroad. WBC has helped to fund its work.

The Ethical Threads story began when Billy Bragg approached GMB London Region and asked if they would be able to source non-sweated T-shirts and merchandise for his tour. This led in 2007 to the setting up of Ethical Threads with WBC funding to provide T-shirts for the music industry. Union connections were used to seek out workplaces in the UK and abroad that met international conventions on workers’ rights, ensuring fair treatment of workers all the way through the supply chain.

Ethical Threads is a 50/50 stake-holding between BWTUC and GMB London Region, which continues to run the company. With this initiative, WBC was a pioneer in creating demand for and delivering sweat-free, fairtrade and environmentally friendly clothing.

Haiti Solidarity fostered links with activists in Haiti who were supporting trade union organisation in the ‘free trade zones’, where big international companies were establishing factories to use cheap unregulated labour from Haiti’s large population of people in extreme poverty. WBC funding supported an organiser there.

WBC funding arising from our stake-holding in Glastonbury Festival has helped with trade union organisation in the Latin American banana plantations that supply most of the world market. Banana Link is a not-for-profit co-operative campaign for fair and sustainable banana and pineapple trades. They raise awareness of the poor living and working conditions faced by plantation workers and small producers in Latin America, Africa and the Caribbean.

Banana Link builds solidarity links between Latin American and West African trade unions at one end of the supply chain and British trade unionists at the other. 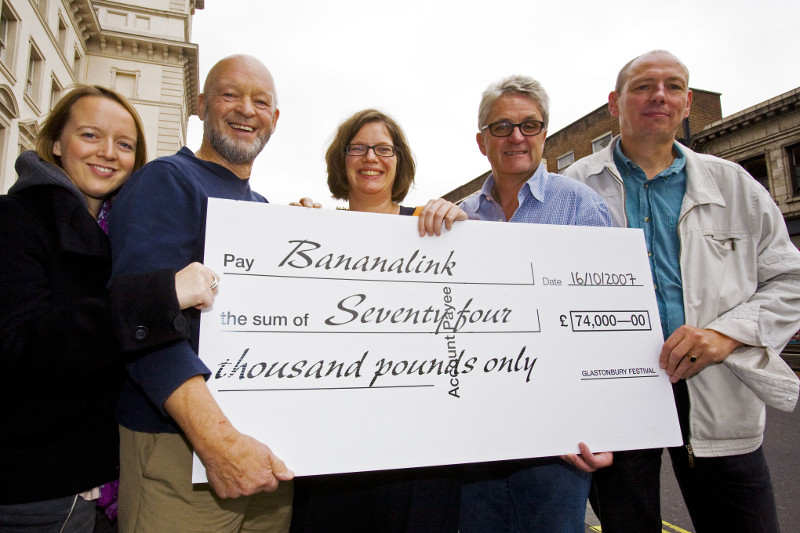